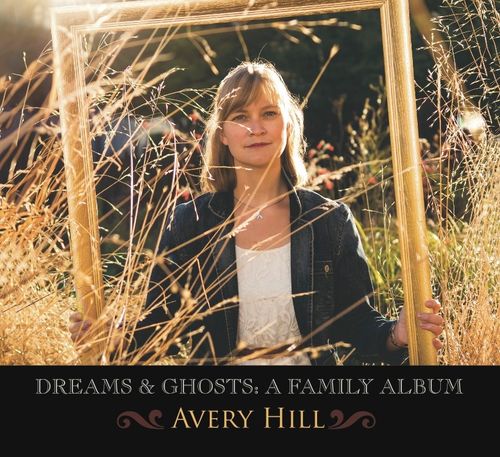 Thanks to supporters across the globe, the Kickstarter campaign for this album was a SUCCESS and released independently in 2015. Click here to learn more about the campaign.

Be sure to visit DREAMSANDGHOSTS.COM to learn more about the album, find song lyrics, and join the conversation about the importance of family stories.

To purchase your copy (CD or download) of Dreams & Ghosts, you can do so at CDBaby.com

How can understanding the lives of our ancestors help us make sense of our own lives, even as we live them? This question drives every song on Avery Hill’s DREAMS & GHOSTS, reaching into the past in order to understand the present and step confidently into the future. Like the traditional photo album, DREAMS & GHOSTS presents musical snapshots of Hill’s family history, with characters, stories and ideas that quickly tap into the universal themes of growing up, being brave and finding purpose.

Each song immediately sets the tone for the story it tells, from bluesy resonator guitar on album opener Hello & Goodbye and songbook-era crooning of I Want to Know You through to sweeping, ghostly sounds of God Save the Watchman and horse-trotting cowboy tempos of Road to Colorado. Some songs capture the voices of specific characters within their stories, as in tender-hearted yet not-so-innocent Summer 1957 and hopeful, adventurous Missouri. Others use Hill’s own voice to make sense of her story within the context of her family history, as in the powerfully introspective Lover’s Leap, as well as to invite listeners directly to ask themselves “what do you find in the lines leading right here to you?”, as in the culminating Who Are You From?

While the songs of DREAMS & GHOSTS stand alone as distinctly human stories on their own, together they represent the breadth of Hill’s writing abilities in different musical directions and the depth she is willing to travel to uncover what these stories have to offer. They are rooted in the original purpose of folk music to capture stories of real people, but go a step further to find the meaning in these stories that could help make us a better collective people.

Hill recorded and self-produced DREAMS & GHOSTS in Portland, Oregon, at Medicine Whistle Studios with engineer Dan Rhiger. The album was mastered at RFI Mastering in Seattle, Washington. She hand-picked local talent to support her studio work, including Skip von Kuske of Portland Cello Project on cello and mandolin; JP Garau on piano; up-and-coming independent artists Kelly Bosworth on harmony vocals and Anna Tivel on fiddle; Richey Bellinger on resonator guitar; Bernardo Gomez on bass; Chris Stewart on guitar and snare; and her brother, Jono Hill, on the duet Missouri. For the final track, the traditional call-and-response The Work I Do, Hill assembled a choir that included local legend Anne Weiss.

Family legend has it that Avery Hill sang before she talked. She lived abroad in Germany and taught children of all ages in school, after-school and outdoor classrooms before beginning work in music. Her winding road has allowed her to develop a singular style of songwriting that integrates intricate but steady fingerpicking patterns with insightful, image-based lyrics. She grew up to a soundtrack of mid-20th century folk and pop music, including The Beach Boys, Judy Collins, Stan Rogers, and everyone in between. When she first heard Dar Williams at the Newport Folk Festival, she began creating her own soundtrack of voices of a new era, including Anais Mitchell, Girlyman, and Gillian Welch, among others. In combining these influences, she has found her own voice, both wise and curious and not afraid to explore new styles and directions to find what she’s looking for in her songwriting.

Check out the latest on: 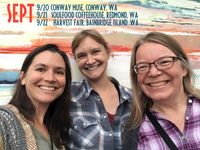 After several fabulous shows with Jaspar Lepak and Mandy Troxel, I'm excited to announce we have officially formed a trio! We'll be debuting as such at three shows in the Seattle region this weekend. As you can tell from the photo, we're kinda excited ... Pre-purchase tickets here.